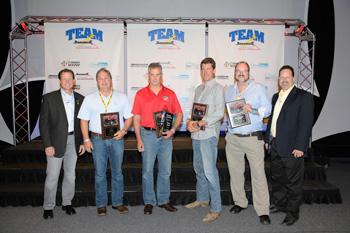 The annual convention is held each year at Basement Systems headquarters in Seymour, Conn. and the Connecticut Convention Center in Hartford, Conn. The three day event brings together dealers in the international network for training, seminars, networking, vendor and team building events, and a celebration of achievements.

Out of 221 active dealers, Adirondack Basement Systems was awarded:

The high-powered event featured best-selling author and motivational speaker Aron Ralston. His book, Between A Rock And A Hard Place, was turned into the critically-acclaimed movie titled 127 Hours starring James Franco. Ralston moved the crowd with his inspirational story of survival and posed for pictures afterwards with attendees.

Google also had a presence at this spectacular event. Two Google representatives delivered a behind-the-scenes peek at how to best utilize the search engines tools for successful business results.

Close to eleven hundred people attended the annual Basement Systems Convention this year, which is the highest attendance to date. The flagship event is held each August in Connecticut.

Adirondack Basement Systems has been repairing wet, leaky basements since 1997. They are a member of the Basement Systems, Inc. basement waterproofing network, which allows them to provide their customers with patented, award-winning wet basement solutions. Adirondack Basement Systems has helped to dry thousands of basements throughout the Greater Schenectady area. They specialize in sump pump installation, crawl space encapsulation, moisture control, basement finishing and “all things basementy!” They are accredited by the Better Business Bureau and a member of the Capital Region Builders and Remodelers Association, National Association of Home Builders, and New York State Builders Association.

Basement Systems, Inc. is the leader in the development of products used to provide a dry, below-grade space. These waterproofing solutions are delivered through a network of trained, experienced dealers. Basement Systems is a network of more than 300 dealers throughout the United States, Canada, United Kingdom, and Ireland. Each dealer receives comprehensive, on-going training at company headquarters in Seymour, Connecticut. All Basement Systems dealers have the same goal: to provide a permanent solution for healthier basement environments.

About the author
Jennifer is the Director of Employee & Customer Relations at Adirondack Basement Systems.